The Khaptad National Park is a protected area in the Far-Western Region, Nepal that was established in 1984 Stretching over the four districts of Bajhang, Bajura, Achham and Doti it covers an area of 225 km2 (87 sq mi) and ranges in elevation from 1,400 m (4,600 ft) to 3,300 m (10,800 ft).The proposed area of buffer zone is 216 sq. km. The park is the only mid-mountain national park in western Nepal, representing a unique and important ecosystem. The late Khaptad Swami moved to the area in 1940’s to meditate and worship. He spent about 50 years as a hermit and became a renowned spiritual saint. The park offers a challenging yet rewarding experience unlike any other protected area in Nepal. To the north one can see the Saipal Himalayan Ranges.

In the other direction the vast green mid-hills of Nepal can be seen clearly. There are 22 open patches of Patans (pasture land) mix together with the forests inside park. The local people graze their livestock in the Patans during the summer season. In the north-eastern part of the park, there is a lake called Khapad Daha.

Seasons
The seasons of spring (March-May) and autumn (October-November) are the best times to visit the park. The temperature ranges from 10°c to 20°c offering pleasant trekking weather. The monsoon begins in June and last until September during this time paths become muddy and slippery. From December to February winter brings snow and chilling winds.

The flora of the park can be divided into three basic vegetation zone’s-subtropical, and temperate. In the lower altitudes (1000 – 2000 m), subtropical vegetation dominates the landscape; Forest mainly consists of Montane Sal, Pines and Alder species. From 1800m – 3000 m temperate primulas,buttercups, and wild berries. A wide variety of medicinal herbs (about 224 species)occur inside the park. type dominates the landscape. The forest there are comprised of lower temperate mixed broadleaved species (Lindera nacusua, Cinamomum tamca. etc), temperate mixed evergreen species (Spruce, fir, hemlock, oak. etc), and upper temperate broad-leaved species (Aesculus indica, maple, etc.) Fir oak, birch, and rhododendron arc the major species found there. Intertwined into the landscape of the Khaptad plateau are the Patans (pasture land) with beautiful flowers (about 135 species) that bloom in the summer and late spring.

Climate
The seasons of spring and autumn are the best time to visit the park. From December to February winter brings snow and chilling winds.

Attraction
The tribeni confluence made by three rivers,Sahashra linga,Nagdhunga and Kedrdhunga are the main attraction of Khaptad. There are 22 open patches of patans(Pastureland) mix together with the forest inside the park. With beautiful Flowers(about 135 species) end medicinal herbs(about 224 species) are occurs inside the park. One can see a lake called Khaptad Daha from north-eastern part of the park. To the north one can see the Saipal Himalayan Ranges. 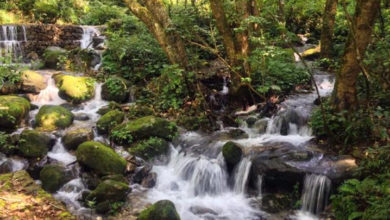