One of the most historic temples, the temple of Changu Narayan dates back almost 3000 years and is said to have been built during the Lichhavi Era around the 4th Century. Perched on a hill top 4 kilometers north of the city of Bhaktapur, in ancient times the temple was surrounded by a lush champak tree forest and a small village known as Changu. The hill is 12 km east of the capital and the Manohara river flows right beside the hill. The principle shrine is believed to have been established in 325 AD, the temple was reconstructed in 1702 Ad after a devastating fire.

The temple is dedicated to the Hindu diety Lord Vishnu, apart from the main temple numerous other shrines at the premises dedicated to Gods and Goddesses such as Chinna Masta, Lord Ganesh and Lord Krishna. The premises of Changu Narayan is also home to one of the oldest stone slab which dates to the 5th century and features various inscriptions form the Lichhavi Era.

The temple of Changu Narayan was originally built in the 2nd century during the Lichhavi Dynasty. It was rebuilt in 1702 after a major fire occurred. Changu Narayn has a collection of statues and sculptures, Changu Narayan is also famous for its beautiful crafts in wood, stone and metal.

Everything in and around the temple is a genuine work of art.

Among the various foundation lores surrounding the temple it is stated that one of the Kings of Kashmiri Kings gave his daughter, Champak, in marriage to the price of Bhaktapur and the temple is named after her. The chronicle of the history of Nepal documents the origin of the temple, ” Takshak Nag, who was also formerly compelled by Manjusri to leave the valley, became angry, when it was again under water, began to bite people without any provocation. This sin produced leprosy in his body, and, to expiate his offence against Manjusri he came to Nepal and began to practice austerities at Gokarn, where the price Gokarn had obtained salvation. Garud, seeing him, came to catch him, but he being more powerful than Garud , on account of the austerities he had practiced, caught hold of Garud and kept his head under water.

Guard invoked the aid of his master Vishnu, who came, and was going to strike Takshak with his chakra, but in the mentine Aryavalokiteswara-padma-pani-bodhistwa, seeing that a Nag observing austerities was being killed, came from Sukhavati Bhuvan (heaven) to protect him. Vishnu then took him on his shoulders and the Lokeswara caused friendship to be established between Garud and Takshak and put the latten round Garud’s neck. Then Garud lifted Vishnu; and the hon, which had been ridden by the Lokeswara, lifted up Garud, and, flying into the air, alighted on a mountain, which was named Hari Hari Bhana, where the Lokeswara disappeared. This mountain was in consequence named Charu, but since then has been corrupted into Changu. (The hill 5 miles east of Kathmandu lies a composite image, represting Lokeswara upon VIshnu, upon Garud, upon a lion.) “- Wright, 1877, 95

The temple itself is a magnificent piece of Nepali architecture with rich embossed works of wood and bronze. The temple is two-storey roofed temple standing on a high plinth of stone, research conducted by Professor Madan Rimal of the department of Sociology and Anthropology state that the temple is neither a Shikara style nor the Pagoda Style,but is a traditional architecture of Nepali temples, and the temple bears similarities to the Gokarna Mahadev temple.

The temple has four entrances and the gates are guarded by life-size pair of animals such as lions, sarabhas, griffis and elephants on each side of the entrance. The struts of the temple feature the ten incarnations of Lord Vishnu and other idols craved in wood. The temple premises lights up during festivals such as the Changu Narayan Jatra, Mahashanan, Haribodhimi Ekadashi and especially Nag Panchami.

This shrine is dedicated to lord Visnu and held in special reverence by the Hindu people. This temple is considered to be the oldest temple in the history of Nepal. The Kashmiri king gave his daughter, Champak, in marriage to the prince of Bhaktapur. Changu Narayan Temple is named after her.

Situation of Temples After Earthquake

The temple was rebuilt in the following years. More recently, the Gorkha Earthquake of April 2015 damaged 753 temples, shrines, and monasteries across Nepal, including 241 in Kathmandu. Changu Narayan suffered heavy damage but restoration projects began almost immediately.

Know Before You Go

Changu Narayan is located about seven miles east of Kathmandu. From Kathmandu you can take the bus to Bhaktapur, then take another bus to the temple. There’s also a museum located on the way up to the temple. Inside the temple complex you are free to explore most of the grounds, but only priests can enter the main temple.

The entrance fee for foreign nationals is 350 Nepalese rupees ($3.50 US) and 250 Rupee for SAARC Nationals. 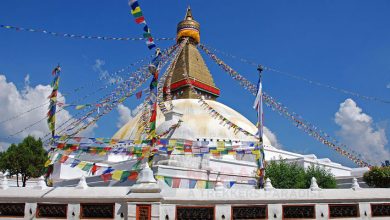