Langtang is a region in the north-central Himalayas of the Bagmati province of Nepal. Langtang National Park is indeed nature’s treasure in the lap of Himalayas. The region has some of the most breathtaking treks in Nepal. Plan a trip to Kathmandu and visit this of the most intoxicating trekking experience and thrilling wildlife encounters. It was established in 1976 to conserve the unique flora and fauna of the region. It is the nearest national park of the capital Kathmandu in the Central Himalayan Region.

The northern and eastern border of the national park runs along the international border to Tibet. The western boundary follows the rivers Bhote Kosi and Trisuli and the southern border lies 32 km (20 mi) north of the Kathmandu Valley.

Some of the most attractive areas of the park include the Langtang Valley, the holy lakes at Gosainkunda, and the forested hillsides above the village of Helambu. The deep gorges of Bhote Koshi and Langtang Khola are thickly forested with rhododendron, oak, maple, and alder.Langtang National Park represents some of the best examples of graded climatic conditions in the central Himalaya. Elevation gradients (ranging from mid-hills to alpine) coupled with complex topography and geology have produced rich biodiversity.

Langtang is the third popular trekking area in Nepal, after the Sagarmatha and Annapurna regions. Due to this the facilities along the most popular trekking routes are good and finding a Teahouse lodge for your overnight stay and lunch or dinner is no problem.

Come prepared for a lot of trekking for your trip to Langtang in Nepal. The exploration of the park involves a lot of footslogging which is why the seasons of Autumn and Spring pose the best time to visit.

The clarity is great during Autumn (Sept – late Nov) and the views are gorgeous during Spring (Feb – mid April). If you are not the “peak-season-traveler” and are enough warm-blooded then coming here during Winters (Dec – Jan) is also an open option for you. Winters in Nepal are not snowy but pretty chilly. But a crowd-free trip comes as a perk for visiting the Langtang National Park during this season.

How to get Langtang

There are several ways to reach the park. The most common, and leading to the park headquarters, is through the Trishuli Highway by bus or private vehicle. You can reach Langtang National Park from Kathmandu in a 4 hours drive (202Km). There are early morning buses starting from 7-9 am, which run from Machhapokhari, New Bus Park in Kathmandu. 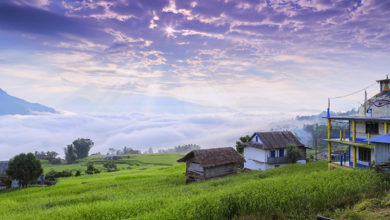