Kirtipur is an ancient city of Nepal. Once-proud KIRTIPUR (“City of Glory”) occupies a long, low battleship of a ridge 5km southwest of Kathmandu. Commanding a panoramic – not to mention strategic – view of the valley, the well-preserved old town is vehicle-free and great for a morning or afternoon’s wandering. It also conceals, deep within its miniature maze of brick and stone streets, one of the best Newari restaurants in the valley.

It is one of the most famous and religious places to visit. Anyone who admires a location with rich history, good food and interesting structures will love for sure.

Established as a western outpost of Patan in the twelfth century, Kirtipur had gained nominal independence by the time Prithvi Narayan Shah began his final conquest of the Kathmandu Valley in 1767. The Gorkha king considered the town to be the military linchpin of the valley and made its capture his first priority.

After two separate attacks and a six-month siege, with no help forthcoming from Patan, Kirtipur surrendered on the understanding it would receive a total amnesty. Instead, in an atrocity intended to demoralize the remaining opposition in the valley, Prithvi Shah ordered his troops to cut off the noses and lips of every man and boy in Kirtipur.

Supposedly, only men skilled in the playing of wind instruments were spared. The rest of the valley fell within a year.

Places to visit in Kirtipur

Restaurants in the area have not developed much yet, so you really should not expect anything to be open in the off-peak season. However, Newa Lahana serves some genuine Newari food, and visitors claim that one must try their authentic local cuisine when in Kirtipur.

How To Reach Kirtipur

Getting to Kirtipur is fairly easy. Buses leave for the area from Ratna Bus Park in Kathmandu after every 30 minutes. The bus fare is NRS 25, and you should reach your destination in 25 minutes. Alternatively, you can hire a car from Thamel to Naya Bazaar and back to Thamel for NRS 2000. The journey by taxi would take around 15 minutes in all. Cycling to and back from the town is also a feasible option for the adventure lovers and fitness enthusiasts.

Kirtipur is one of several ancient kingdoms in the Kathmandu Valley that were once independent, but now make up part of greater Kathmandu. It’s a prime destination to learn about the Newar people, who are one of Nepal’s many distinct ethnic groups and the original inhabitants of the Kathmandu Valley. Come to Kirtipur for exquisite architecture, hilltop temples, and sweeping city views. Book half day sightseeing tours in Nepal. 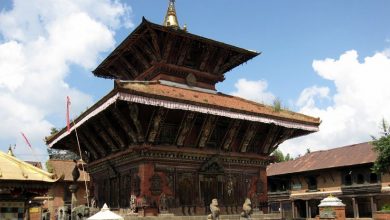