Nepal Airlines Corporation’s A330 is making chartered flights to Australia. Nepal Airlines will make a special flight carrying citizens of Australia those who were stuck in Nepal. After the Nepal government announced nation lockdown as an adverse effect of COVID-19 cases.

The Australian authorities on Tuesday cleared Nepal Airlines to fly to Brisbane, Australia to repatriate Australian tourists stuck in Nepal.

As per the plan, the carrier will make its maiden 13-hour-long charter flight to Australia on Wednesday evening.

“We received the operating authorization from the Australian authority today morning. We will take off at 5:30pm from the Kathmandu airport on Wednesday. All internal preparation has been completed,” Captain Deepu Raj Jwarchan, director at the airlines’ operation department, told the Post on Tuesday.

On Monday, the Tourism Ministry granted permission to conduct charter operations to Australia at the request of the Australian embassy in Nepal.

The national flag carrier has to secure overflying permits from India, Bangladesh, Myanmar, Thailand, Singapore and Indonesia as well.

The carrier had originally planned to land at the Sydney airport but the plan changed after the Australian government refused to issue landing permit citing poor quarantine facility in Sydney, which has reported most infected cases of Covid-19.

“The plane will touchdown in Malaysia for refuelling,” said Suresh Acharya, joint secretary at the ministry who looks after the aviation affairs. “We have communicated with five countries through th Foreign Ministry requesting for overflying permits.”

Australian Ambassador to Nepal Pete Budd posted on his embassy Facebook page that the cost to Kathmandu-Sydney flight would be USD 1,800 per person for economy seating and will include a USD 2,300 option for business class travel.

Meanwhile, the United States will also repatriate its citizens from Nepal via a Qatar Airways flight on Tuesday.

According to a Qatar Airways official, the Kathmandu-Doha-Washington DC flight departed on Tuesday afternoon. The flight has been chartered by the US embassy in Nepal for 300 American citizens .

Similarly, the Tourism Ministry has also granted approval for South Korea and China to repatriate their citizens as Nepal has extended the lockdown until April 7 midnight.

On Friday and Saturday, the German and French governments repetritared more than 900 European from Nepal.

Avoid Nepal travel due to the global impact of COVID-19. As a group of adventurers, enthusiasts and fearless travellers, it pains us to tell you this, but the fact is that most travel is currently not safe, and in many countries, not possible because of the COVID-19 outbreak. Nations across the world are fighting to contain the outbreak and flatten the infection curve – an effort that every citizen and responsible traveller should be part of. For the most up-to-date safety information and what you should be doing to help, please consult the WHO and your local government.
Via
Kathmandu Post
Tags
flights to Brisbane Nepal Airlines 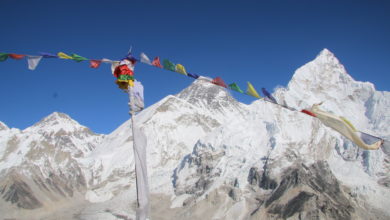