Nepal is home to some of the most spectacular trekking destinations in the world. It offers beautiful locations and destinations for trekking and many other activities. Nepal also has many cultures and customs that reflect the country’s diversity beautifully. Nepal is an ideal place for adventure, spiritual cleansing, and cultural encounters. There are a plethora of options for you to choose from when you are in Nepal trekking, mountaineering, hiking, rafting, and jungle safari. If you wish to enroll in the ethnic and cultural celebrations, the diverse terrains of this country will offer you the best memories.

Trekking in Nepal is perhaps one of the most famous activities to do. The wonderful appeal of the mountains of the country attracts thousands of visitors every year. Trekking in Nepal is also a very good way to get yourself acquired with the people’s lifestyle, their tradition, and their rituals.

Here are the top ten trekking destinations to do in Nepal.

The Everest region, also known as the Khumbu region, is one of the most visited regions for trekking in Nepal. It is situated in northeastern Nepal on the Nepalese side of Mount Everest. The region is a major Sherpa settlement of the Himalayas and has an amazing mountainous landscape.

The Everest region is our most popular trekking destination in Nepal. It is a difficult region of Nepal to access on foot compared to other regions, so a forty-minute flight is needed to fly from Kathmandu to Lukla. Where a small airstrip sits on an angled runway at 2,860m/ 9,383 ft. From there access to the Everest region. Lukla is the quickest way to access the Khumbu but becoming more challenging with rising numbers looking to enter the Everest region.

Annapurna massif, lying in the northern central region of Nepal has the world’s tenth highest mountain, the Annapurna I. Pokhara and the Annapurna region are west of Kathmandu and have some of the best Himalayan mountain views.

Annapurna region comes next to the Everest Region in terms of popularity. However, in terms of actual visitors, the Annapurna Region is the most visited trekking destination in Nepal. The Annapurna Region was inscribed as a Conservation Area in 1986. The protected region covers an area of 7600 sq. km. Around two-thirds of hikers visiting Nepal head to the Annapurna region every year. In this region, there are easily available guest houses, and hotels during the trek & food are hygienic as well.

This region offers incredibly diverse scenery, with high spectacular mountains and low land. Annapurna route also offers unique Gurung culture to expose and experience with it. Depending on the speed of the hiker, number and length, rest days take during the acclimatization, weather, and where the adventure trek is finished and take almost 14 days to trek Annapurna Circuit Trek.

Langtang is a region in the north-central Himalayas of the Bagmati province of Nepal. Encompassed by the icy glaciers originated from the almighty Himalayas, this region is also known as the Valley of Glaciers

The Langtang Valley Trek is relatively a short trek in Nepal but one that runs through rhododendron and bamboo forests alongside waterfalls and mountains. The famed British mountaineer and travel writer, Bill Tilman (1898-1977), called this “one of the world’s most beautiful valleys.” The Langtang Valley Trek is a relatively easy trek and is often far less busy than other popular treks in Nepal. The trek can be done in seven days, however, it usually takes 10 to 12 days.

Nepal’s Mustang Trek is the most demanding trek route in Nepal. Many pilgrimage people visit Muktinath Temple from a different part of the world. Mustang is lying in the rain shadow of the Himalayas is perhaps the last remnant of pristine Tibetan culture. Upper Mustang has a barren landscape and forbidden kingdom of Nepal.

Manaslu is one of the best trekking destinations in Nepal. It has very few travelers annually and is best for the trekkers who want to travel freely. It gives you the authentic experience of remote societies of the west-central part of Nepal. The Manaslu trekking route consists of about 177 kilometers (110 miles) around the Manaslu massif over the pass down to Annapurna. The Nepalese Government only permitted trekking in this region in 1991. The trekking destinations follows an ancient salt-trading route along the Budhi Gandaki River.

There is internet access, and phones as well as other electronic devices can be charged at the teahouses along the trail. The trek makes for a great photo opportunity so you will have something to take back home to reminisce about. All you need is a decent camera.

Manaslu shares much of its culture and history with its neighboring territory, Tibet. Buddhism is a major religion here as showcased by the Buddhist monasteries, the architecture, and traditions all the way.

Trekking in Nepal’s far-western Upper Dolpo region takes you into one of the most remote areas of the Himalaya. Expeditions into Dolpo can be challenging as the tourism infrastructure is almost non-existent, and organized tours are essential. But the rewards are worth it—Tibetan Buddhist culture, some of the oldest monasteries in the country, the spectacular Lake Phoksundo, rare wildlife, and a real sense of being in the wilderness.

Permits for Upper Dolpo are expensive and strictly enforced. You also need to purchase a permit for Lower Dolpo, which you pass through on your way to Upper Dolpo. On top of that, only 250 foreigners are permitted to enter Upper Dolpo each year.

The Makalu trek is a remote route that encompasses some of the best that Nepal. The Makalu region has to offer — quiet trails, vibrant terraced farmland, rural cultures, rhododendron forests, rare wildlife and several 8,000 meter-plus peaks.

Explore the valleys in the eastern region of Nepal and savour the beauty that lies in the fifth highest mountain in the world. Makalu Trek is a beautiful journey that lets you taste the real adventure of walking. The region offers some magnificent views of mountains like Mt. Makalu with other peaks like Mt. Everest, Mt. Lhotse and Mt. Baruntse.

The lush scenery of Arun valley is probably the most beautiful thing that will keep you going throughout your journey. Though many people keep their interest in this trek, the Makalu region attracts only a few travelers during a year due to its remote accessibility and off the beaten trekking trail.

Kanchenjunga Trek is an unspoiled trekking trail in eastern Nepal. It is a restricted trekking region. You must trek with a local guide and at least 2 trekkers. This is the most follow rule set by the Government of Nepal.

The trail to the Kanchenjunga Base Camp trek is less crowded. The trek rewards the trekkers with a unique insight into the remote part of Eastern Nepal. Also, you can witness the rural lifestyles in the region.

Trekking in Kanchenjunga offers the most beautiful Himalayan scenery. You will see the best views of Mt. Kanchenjunga, Mt. Makalu, and Jahnu Himal. You will also see towering heights of Mt. Rothang and Kabru above a moraine on the Nepal-Sikkim border.

Hidden deep within the Himalaya is Humla: the highest, most northern and remote district of Nepal. Humla is culturally diverse, occupied in the northern highlands by Bhotias, and in the southern valleys and riverbeds by the Khasas (Hindus). You will experience these rich and varied cultures as you trek over 16,000 ft passes, through remote villages, and explore ancient monasteries in the vivid Limi Valley.

This amazing trek highlights a different side of Nepal than that seen in some of the more usual trekking routes. It also gives a glimpse into the mystical land of Tibet without having to go through the formalities of getting there!. The pristine sights and sounds of this trek more than makeup for the challenging hiking with some long days.

The Rolwaling Valley is one of the most remote, wild and magical areas in Nepal. It lies Northeast of Kathmandu valley, close to the Tibetan border and between Tama Koshi River and Khumbu Himal. This trek offers a unique opportunity to pass through traditional Shepa and Brahmin villages. Along the trek, we will cross high passes, dense forests, and beautiful waterfalls.

Highlights of this trip include fantastic views of Mt. Gauri Shanker (7146m) and Tso Rolpa glacier lake. This trek is recommended and suitable for adventure seekers that are interested in exploring off of the beaten track.

The valley is not just home to animals and mountaineers. According to Buddhist mythology, Gauri Shanker (the 7,134 metre mountain that dominates the valley) is the embodiment of Tashi Tseringma, the leader of the Tsher Ring Mched Inga. For Hindus, the peak symbolizes Lord Shiva and his consort, Parvati.

WE SAID THIS: The above mentioned Top 10 trekking destinations in Nepal are the perfect picks. It is certainly a must to indulge in this country’s ethereal appeal. 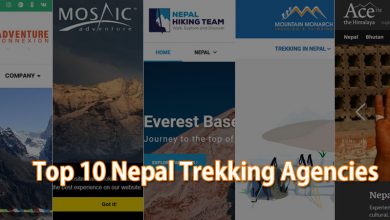 Why traveling with your partner will make your relationship better